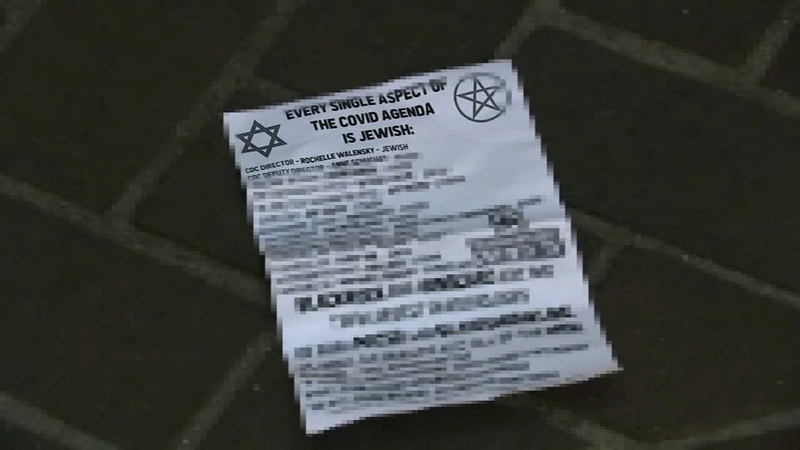 DANVILLE, Calif. (KGO) -- A less than ideal Sunday morning for many people in the picturesque town of Danville.

On Sunday, dozens of local residents woke up to find antisemitic flyers scattered across their neighborhood.

"To see that locally, such baseless hate, is very disturbing, is upsetting," said Rabbi Shmuli Raitman.

Rabbi Raitman is the head of the Chabad of Danville and San Ramon.

He says a member of his congregation found one of the flyers during her morning walk and called him to report it.

More antisemitic flyers have been found in the Bay Area. Police say dozens of sheets with anti-Jewish messaging were found throughout Palo Alto.

In recent months, several Bay Area cities, including Palo Alto and San Francisco, have also had similar flyers pop up.

But experts say these aren't isolated incidents. Anti-Semitic crimes have been rising nationwide over the past several years.

"We are not seeing signs of abatement right now and we are seeing a steady increase," said Teresa Drenick.

Drenick is the deputy regional director of the local chapter of the Anti-Defamation League.

She says these flyers in the particular blame the entire COVID-19 pandemic on Jewish people, and have shown up in at least eight states.

They're created by a fringe, extremist group that tries to spread racist anti-Semitic and white nationalist ideologies.

"This really dangerous rhetoric is very reminiscent of Nazi propaganda during the early 20th century, then alleging that Jews were responsible for myriad issues including the typhoid outbreak."

Despite the vitriol, Rabbi Raitman says the community response has been overwhelming.

San Francisco appears to be the latest city targeted by antisemitic fliers over coronavirus measures.

And he vows to not let the hatred win.

"I think we can focus on the negative, or we can use this as an opportunity to counter, to counter with kindness and love and goodness. And I think that's what we need to do," Rabbi Raitman said.