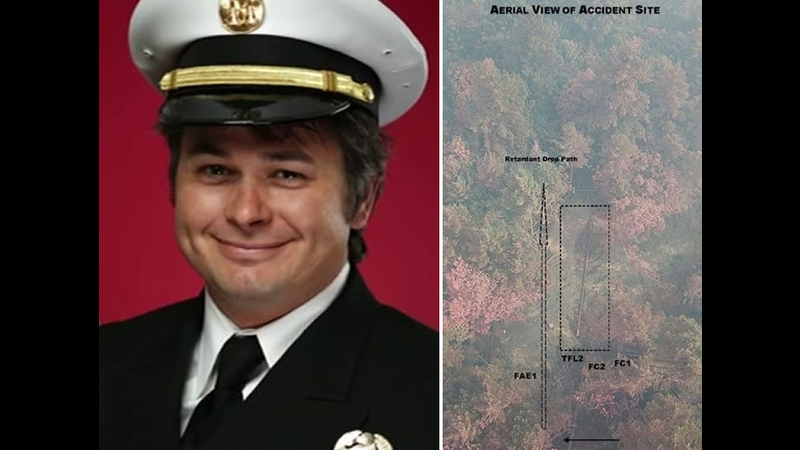 MENDOCINO COUNTY, Calif. (KGO) -- Cal Fire has released a report providing new details about an incident that killed one firefighter from Utah, and injured two others while battling the Mendocino Complex Fire on Aug. 13.

Battalion Chief Matthew Burchett from Draper City died when a 747 supertanker dropped a load of retardant too close to the ground, causing a tree to fall.

A soldier might call it the fog of war. -- a combination of circumstances that put a fire crew in the wrong place at the wrong time.

We all remember the somber send off of Battalion Chief Matthew Burchett from Draper Utah last month. A motorcade. An honor guard. A salute as his body returned home, and questions about what happened.

We already knew that Burchett died and three others were injured during a supertanker drop while fighting the Mendocino Complex fire on August 13.

A new report from Cal Fire now reveals the plane came in too low at 100 feet, not 200 feet, as prescribed, due to an unseen rising hill.

By phone, Cal Fire Battalion Chief Scott McLean said, "The elevation changed significantly as the aircraft was coming in and it was difficult to determine due to the vegetation."

Chief Burchett died when the retardant knocked over a Douglas Fir. The report even includes an aerial photo of it.The tree was 87 feet tall and 15 inches across.


"The tree came down on the chief and then there was other debris associated with that tree that came down and struck the other three firefighters," McClean said.

The planes and firefighters had been working to reinforce a backfire dozer line. Despite a radio warning to clear the area, the Utah team never acknowledged it, with no explanation given.

ABC7 reached out to Chief Burchett's family and some of the injured firefighters on Friday, but there was no comment.