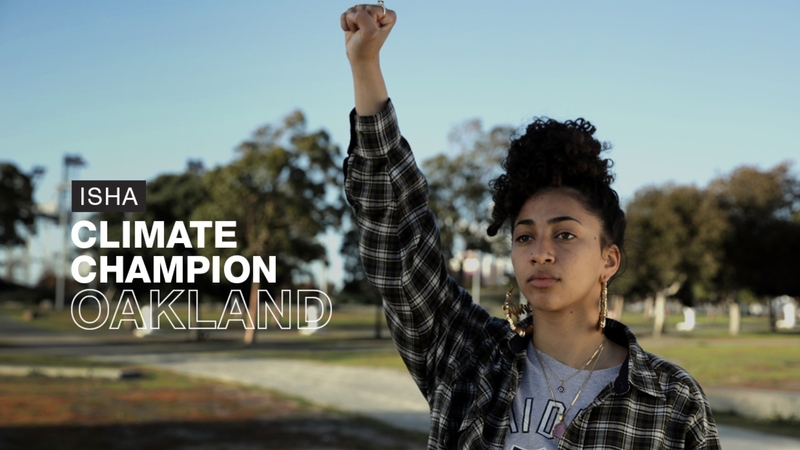 OAKLAND, Calif. (KGO) -- Youth activists are championing the fight against environmental racism and injustice by shining a light on the ways climate change is impacting their communities. Leading the charge in the Bay Area is 18-year-old, award-winning activist Isha Clarke.

"We have been ignoring climate change for over 50 years. And now we're all at a point where no one can ignore it," stated Clarke.

For decades, Black and Indigenous youth have taken leadership roles on the front lines, organizing and mobilizing with groups dedicated to climate activism. Clarke is one of the founding members of Youth Vs. Apocalypse, a diverse group of climate justice activists advocating for an equitable, sustainable environment.

The foundation of Clarke's activism is rooted in both her family's history of activism and her community's rich history of resistance and social justice.

"One of my earliest memories is listening to my grandpa tell me stories of his activism and his social justice work. I remember he would tell me stories about burning his draft papers during the time of the Vietnam War, and going to Guatemala and fighting against the tyranny that was happening there, and going down South when he was in college to be a part of the civil rights movement," Clarke shared.

In 2017, 13-year-old Clarke, along with fellow youth activists, formed the Youth Vs Coal campaign that took direct action against Phil Tagami, a land developer attempting to build a coal terminal through West Oakland.

Understanding that constructing a coal terminal through West Oakland would be detrimental to the lives of working-class Black people, Clarke realized how impactful environmental racism is on the health of her community.

By confronting Tagami's plan, Clarke recognized the power behind youth voices in reimagining and reconstructing a more livable world.

Clarke's Youth Vs Coal campaign transformed into what is now known as Youth Vs. Apocalypse.


"At the very core of our work is restoring humanity and simply claiming that no one is disposable, that all are worthy, and that we should be able to live in a world where everyone can thrive," said Clarke.

In 2019, Clarke was invited to speak outside of Senator Diane Feinstein's office at a rally organized by the Sunrise Movement.

"We were coming to her as the next generation who was saying, 'Use your power to leave us a better world,'" Clarke said.

Through her intersectional activism, Clarke is addressing the root causes of the climate crisis, including white supremacy, colonialism, capitalism, and other systems that center on exploitation. Her ongoing work focuses on building a movement that positions the voices of Black, Indigenous, working-class people, and youth at the forefront, ultimately fighting for collective liberation.

"Collective liberation is about fighting for all people to be able to thrive, and that means really recognizing and analyzing the way in which different groups of people are oppressed, and being able to stand in solidarity with each other, and recognize that the work that each of us are doing is for each other," Clarke said.

"We have this real opportunity to do the work that our ancestors have been trying to do forever, which is to dismantle that faulty foundation and build something new in its place," added Clarke.

"Are we going to rebuild it the same way that it was built, which is causing the destruction of our planet and people? Or, are we going to build it back with justice and sustainability and equity, so that we can really live in a society that values life."

To learn more and support Youth Vs. Apocalypse, visit here.