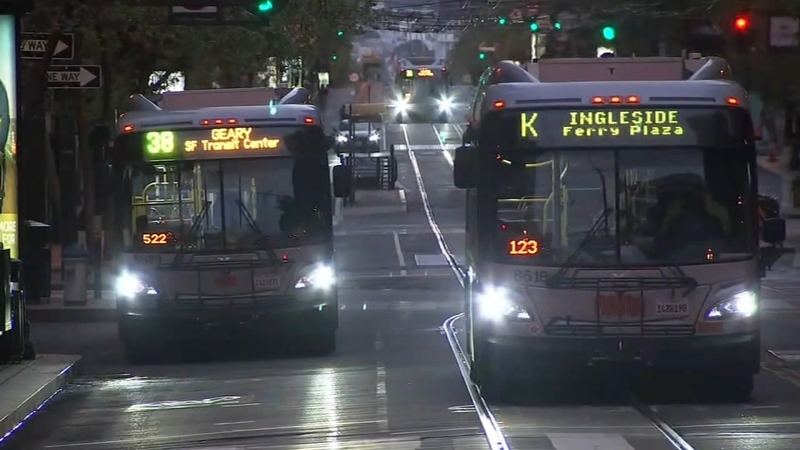 The future is uncertain for San Francisco's post-pandemic bus routes

SAN FRANCISCO (KGO) -- Are you wanting to know when Muni bus service will return to normal in San Francisco? Supervisor Dean Preston convened a special meeting of the Government Audits and Oversight Committee to find out.

"I want a clear commitment from MTA that these suspensions are temporary and these bus lines that people rely on are coming back," said Preston.

He said about a dozen lines were suspended entirely, in addition to service cuts made along other routes.

At the end of the meeting, he and the other supervisors on the committee passed a resolution that would urge the San Francisco Municipal Transit Agency to restore full service by the end of 2021. That will be brought to the full Board of Supervisors for a vote next week.

Service will start to see an increase in August, but Jeffrey Tumlin, the director of transportation at the SFMTA, says they only expect to return to 85% of pre-pandemic levels by the end of the year.

Tumlin says, that's because they need to make some important decisions first.

One of the biggest constraints currently is staffing, with an average of 15% of positions unfilled across the agency.

"At our current pace of hiring, if we had unlimited resources, we can't get to 100 percent service until the end of 2022," said Tumlin.

He said the process to restore service to 2019 levels could be done, but it would cost $85 million dollars. It's money they have from federal stimulus bills, but they were hoping to spread it out over the next few years.

"We could spend all that money in one year, but that then would put us in position of having to do massive service cuts in 2023," said Tumlin.

Supervisor Connie Chan said she believes the investment needs to be made now.

"That is what the federal stimulus money was for, to restore MUNI service back to pandemic levels at this time to meet the critical needs of San Franciscans," said Chan.

RELATED: Muni faces financial crisis due to COVID-19, most bus lines could vanish for years

Preston said, there will be some flexibility but he wanted a guarantee that routes won't suddenly disappear.

"It's less about getting the specific date than it is about getting a firm commitment that they will restore all the MUNI lines that were suspended at beginning of pandemic," said Preston. "To date, they have not made that commitment."