Oakland Police Chief after violent weekend: 'Far too many people have been let out of custody' 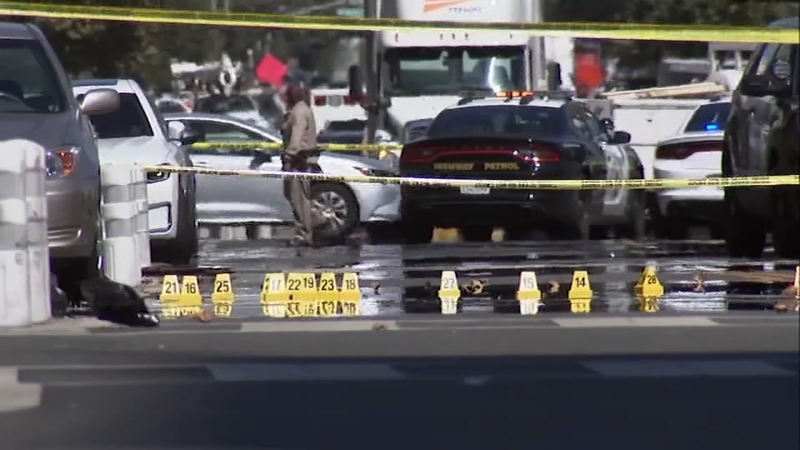 OAKLAND, Calif. (KGO) -- Oakland Police Chief LeRonne Armstrong on Tuesday addressed the widespread violence across the city and how ghost guns are playing a part in these crimes.

During the news conference, Chief Armstrong showed two videos that gave a glimpse at the violence the city is facing.

In the first video, a car could be seen crashing into a fence as a shooting broke out. A person gets out of the vehicle and is holding a rifle while trying to escape the gunfire.

In the second video, two people could be seen getting out of a car, turning around, and opening fire on an approaching vehicle. The driver of that car then smashes into the shooter's vehicle before coming to a stop in the middle of an intersection.

Chief Armstrong says these are the kind of incidents Oaklanders are facing every day and it has to stop.

The chief went on the offensive Tuesday, calling out Alameda County's judicial system.

"Far too many people have been let out of custody after being caught with firearms," he said.

"Far too many individuals who have been released under the emergency bail schedule continue to engage in criminal activity. We have seen an escalation in the seriousness of the crimes being committed after release without a bail. This is especially true when the crimes involve firearms, which we know have increased substantially and are wreaking havoc on communities and individuals. The need to return to the original bail schedule (pre-COVID) is equally critical in that hundreds of individuals who are arrested and charged with new crimes are already under the court's jurisdiction, either on probation or parole. The District Attorney is advocating for a return to the pre-COVID bail schedule for those who are on probation or parole, or those with prior convictions."

The DA's office went onto say, it "has created several programs to help individuals move away from the criminal justice system, for example, the C.A.R.E.S. Navigation Center for those with mental health or substance-use disorders, Early Intervention Court, or Behavioral Health Court, all addressing the needs and issues of the individual who is charged with crimes. This is a supportive environment as an alternative to incarceration. "

While violence interrupter Nina Carter says she agrees with the chief, she also says we need to get to the root of the problem, by trying to help young people who often end up on one side or the other in dangerous situations. It's a segment of young people she says who don't have safe places to go in Oakland and because of that, they're often led down the wrong path.

"As a teenager in this day and age, they out here really fending for themselves, so at the end of the day when you don't value their life then they don't value life. So at some point we have to get some structure," says Carter.

Carter would like to see that structure in the form of activities for youth in East Oakland, and not only counselors and interrupters for those who get in trouble, but mentors.

RELATED: Police search for answers after 14-year-old shot and killed in Oakland

While homicides are down in Oakland so far this year from 41 to 34 according to the chief, there is a 30-percent increase in the amount of guns that are being recovered.

Barry Donelan of the Oakland Police Officer's Association says officers are struggling to respond to 2,000 calls a day.

"We're down to 652 police officers today and that's hundreds below where we were just two years ago, 400 below where we actually need to be," says Donelan.

In just the last week, a homicide by Lake Merritt, another victim found murdered in a vehicle, an on-duty security guard at one of Oakland's "tuff sheds" homeless encampments shot and killed, and a 15-year-old girl gunned down - the 34th person to lose their life in Oakland so far this year.

According to the Oakland Police Officers' Association, the city ranks last among California cities for safety.

"This has become a revolving door with officers working every day to make the city safe only to find individuals coming right back onto the streets the next day. This emboldens people. It says to people there is no accountability. I can commit these crimes and don't have to worry about being prosecuted. That makes our community less safe," said Chief Armstrong.

A young woman who has volunteered for years to keep Oakland safe, fell victim to a brazen physical attack and carjacking by multiple men.

The chief says judges have to get tougher and Oakland needs more resources.

This comes after President Joe Biden announced new federal regulations, where the chief calls this a step forward.

In addition, businesses that buy ghost guns for re-sale must create a serial number before they are sold again.

The mayors of San Jose and Oakland were among the anti-gun violence advocates at the White House on Monday.

Oakland Police Chief Leronne Armstrong released a video on YouTube about the new legislation on the heels of a 15-year-old girl being shot and killed in Oakland this weekend.

"She is the 34th person to lose their life in the city of Oakland this year," said Chief Leronne Armstrong/Oakland Police. "Like most major cities in America, Oakland is experiencing the alarming amount of gun violence and the growing presence of personally manufactured firearms, commonly known as ghost guns. Last year, I was fortunate enough to be invited to the White House where the President introduced legislation to rein in the rapid use of personally manufactured firearms."

The regulations aim to make ghost guns easier to trace but are likely to get strong resistance from the gun lobby.