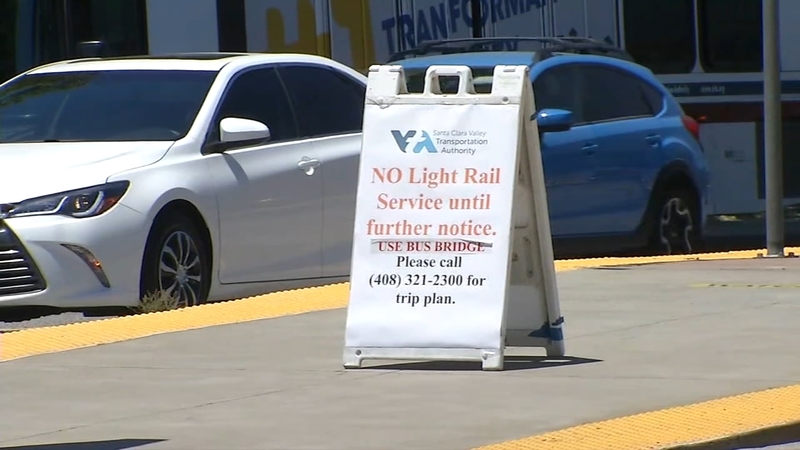 SAN JOSE, Calif. (KGO) -- Wednesday, July 14, 2021 will mark seven weeks since the deadly mass shooting at the Valley Transportation Authority (VTA) light rail yard in San Jose. Since then, the agency has discontinued light rail service across the region.

Last week, the VTA announced it planned to resume service by the end of July. However, at Tuesday night's VTA Board Meeting, that timeline was pushed back and postponed to potentially fall 2021.

Part of the board's discussion surrounded what would become of the shooting site. Any return to the Guadalupe light rail yard could involve remodeling or rebuilding.

By now, many have seen the body-cam footage, recorded on the morning of the massacre. The chilling four-minute video showed the team of first responders who were on a mission to locate and stop the active shooter.

To this day, there is physical damage to the facility, and also the emotional scars for employees who will eventually return to work there.

The subject, serious enough to spark discussions about how to rebuild.

"It was determined that we could not return to Building B," Robert Daniels with VTA said at the board meeting. "Due to the incident, parts of the 3rd floor of Building A are difficult to return to and need to be remodeled or rebuilt."

Daniels was introduced as the Project Manager to resume light rail service. He explained those options could take between three to five years to complete.

Reconstruction isn't a new idea, as buildings involved in several of the nation's mass shootings were demolished after those tragedies.

"It's sad, but it's true," Santa Clara Univ. Psychology prof. Dr. Thomas Plante told ABC7 News. "There's so many communities who have had to deal with this issue, that they've probably learned some lessons along the way that they can share with San Jose."

Dr. Plante added, it becomes a real challenge to rebuild every place where there is a shooting.

"There's no question that people are traumatized," he continued. "You want to do the best you can to help those folks, kind of, go back to life."

Meantime, VTA is establishing interim work sites that would allow for necessary training and transitioning, before rail service resumes.

The agency introduced its six phase reopening timeline which maps out service, staffing and infrastructure.

However, those plans won't come soon enough for the few, critical of having spent nearly seven weeks without light rail service. Many spoke during Tuesday's public comment period.

One person shared, "First of all, I had to take three buses instead of a light rail and a bus. So, it takes me longer to get to work."

"Second of all," the VTA rider continued, "Football season is coming up soon. So, we need to get this thing on the roll as soon as possible."

Another shared, "The reason we are in the current predicament is that we didn't have a back-up facility anywhere in the light rail system. How we ever got there, I have no idea."

The VTA making it clear on Tuesday, there is no set restart date for rail service. The agency's 'Roadmap for Resuming Light Rail Service' shows that may happen closer to September.