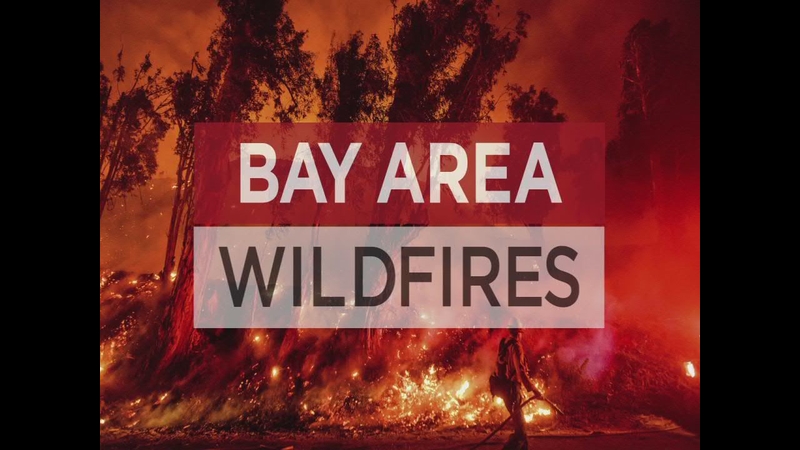 Here are the latest developments on the blazes in the Bay Area.

6 p.m.
CZU Lightning Complex Fire grows to 74,000 acres, kills 1 civilian, CAL FIRE says
According to CAL FIRE, one person has died amid the CZU Lightning Complex Fire that has scorched 74,000 acres in San Mateo and Santa Cruz counties. The wildfire is 8% contained and officials say there are still 24,000 structures that are threatened. Read more here.

11 a.m.
LNU Lightning Complex Fires burn 341,238 acres, 17% contained
The LNU Lightning Complex Fires have burned 341,238 acres, and is 17% contained, Cal Fire officials said Sunday during a press conference. Fires burning in Napa, Sonoma, Solano, Yolo, Colusa and Lake counties have destroyed 845 structures, and damaged 231 others. 17,004 fire personnel are working to get the flames out, with help of firefighters from Washington and Oregon as well. Crews are equipped with 233 fire trucks, 11 helicopters and 37 bulldozers to aid their efforts. Fire officials say there will potentially be more evacuation orders issued, and residents can keep an ear out for Hi-Lo siren noises.

9:30 a.m.
Woodward Fire burns 2,689 acres, 5% contained
Officials gave an update Sunday morning on the Woodward Fire burning in Marin County that has burned 2,689 acres and is 5% contained. Currently 1,620 structures are threatened in the area. Officials say 211 fire personnel are on the scene with the flame fighting efforts. Drones are also being used to capture and track the burn areas.

6 a.m.
Firefighter had wallet stolen, bank account drained while battling CZU Lightning Complex Fire
Officials held a press conference at 6 a.m. to give an update on the CZU Lightning Complex Fire that's burning in Santa Cruz and San Mateo counties. During the press conference, CAL FIRE officials announced that a commander fighting the blaze had his department vehicle broken into, his wallet stolen and bank account drained. Get the full story here.

NWS: 50% chance of lightning strikes in CZU Complex Fire area
A spokesperson for the National Weather Service said that there's a 50% chance that the CZU Lightning Complex Fire area will see a direct hit this evening from lightning during thunderstorms move through the area. Get the full story here.

"With the wind shift and then also looking ahead at the potential for thunderstorms moving through the area -- there were additional warnings and orders that went into effect -- that somewhat stretch along the west side of Highway 101 and in the area south of Cloverdale to the area of Windsor. So that's a large area, that's a big geographical area but it also shows what the potential is out here," Paul Lowenthal, public information officer for CAL FIRE said.
Read the full story here.

"We saved a lodge and 20 cabins below," said Mark Hendricks. "Now, we're working on another lodge and another cabin and few houses... one house just burnt down this morning." Hendricks is trying to save what's left of the Sequoia Retreat Center in Ben Lomond.
Read the full story here.

7 p.m.
CAL FIRE issues evacuation warning in parts of Alameda Co. ahead of expected winds, thunderstorms
CAL FIRE issued an evacuation warning Saturday night for unincorporated parts of Alameda County because of expected high winds and scattered thunderstorms, according to the county sheriff's office. The conditions could begin tomorrow morning, through Tuesday night, the sheriff's department said. Residents with pets and livestock are encouraged by officials to leave the area due to fire threat. The warning applies to those in unincorporated, eastern areas of the county. For a map showing areas under the warning, click here.

The governor thanked the president in a statement Saturday as California firefighters and first responders take on wildfires and "unprecedented" conditions sparked by last weekend's lightning event.

5:04 p.m.
Crews battle multiple small grass fires in San Bruno
San Bruno Fire is battling a grass fire along the area of I-280 south of Crystal Springs and Peninsula High School. Officials advise there is no need to evacuate at this time and ask people to stay away from the area of Courtland Drive.

⚠️ATTENTION⚠️ San Bruno Fire is working a grass fire along the area of I280 south of Crystal Springs and Peninsula High School. Fire department officials advise there is no need to evacuate at this time. Please stay away from the area or Courtland Drive. pic.twitter.com/t2XzWAL96F

5 p.m.
Marin Co. officials discuss latest on Woodward Fire in virtual town hall
The Woodward Fire is burning through Point Reyes National Seashore, north of Bolinas. As of Saturday morning, officials say the fire has burned 2,259 acres and is 5% contained. It's burning in the north and northeast direction. Officials say they are concerned of the wind getting stronger within the next few days.

4p.m.
Sonoma County and CAL FIRE officials give update on wildfires
Officials from Sonoma County and CAL Fire spoke warning residents of the anticipated weather (and wind) change tomorrow.
So far, 314,207 acres have burned and is 15 percent contained. The fire has been mostly burning in the southwest direction of the Dry Creek area.
They are telling residents to be ready to evacuate, and to also check on your neighbors.

"Across California, extreme heat and lightning strikes contributed to some of the worst wildfires we have ever seen. As of today, almost 1 million acres have burned, including parts of our oldest state park. Damage to public and private property has been significant with thousands of homes destroyed. More than 100,000 have had to evacuate. People have died.

She continues on to say:

"I am joining Governor Newsom and my colleagues in Congress to call on FEMA and the White House to expedite a Major Disaster Declaration and render immediate federal aid to California. It is crucial that California can count on the federal government's assistance in addressing this natural disaster.

You can read full statement here.

11a.m.
CAL FIRE officials update on LNU Lightning Complex Fire
Officials say, 314, 207 acres have burned and is 15 percent contained, 560 buildings have been destroyed, and roughly 125 structures are damaged. You can watch the video in our main video player up above.

9:30 a.m.
Marin Co. officials update on Woodward Fire burning in North Bay
Officials say the fire has burned 2,259 acres and is five percent contained. It's burning in the north and northeast direction. They are concerned of the wind getting stronger within the next few days.

Marin County officials say the Woodward Fire has burned 2,259 acres and is five percent contained. It's burning in the north and northeast direction. They are concerned of the wind getting stronger within the next few days.

8 a.m.
Cow Palace opens as evacuation center for animals
The Cow Palace is opening up as an evacuation center for livestock.The venue has set up shelters for horses and other large animals because of the fires.
Owners are asked to make sure their animals have identification tags on them with your phone number. They are asking for donations for wheel barrows, bales, and water.
You can find out how to donate on the Cow Palace website.

Officials gave a second morning briefing to update the day's plan of attack for the CZU Lightning Complex Fire.

You can watch the full 6a.m. press conference down below.

The Sonoma County Sheriff's Office says a helicopter rescue team saved two firefighters with the Marin County Fire Department on Friday night, as they were suddenly trapped by flames from the Woodward Fire, near Point Reyes. The sheriff's office said the two firefighters were deep in the brush when they found themselves stuck and about 75 yards away from the advancing flames. Both were successfully pulled out and flown to safety.

You can tune in live to watch by joining ABC7 News, streaming live on abc7news.com/watch/live.

9 p.m.
Santa Cruz evacuation center already full
One of the main evacuation shelters for the CZU August Lightning Complex Fire in Santa Cruz County is at capacity. 79 families are there, and due to COVID-19 precautions, space is limited as people have to keep proper social distance. San Mateo County has since opened two new shelters to help provide more shelter to evacuess.

7 p.m.
Couple loses 'dream home' to wildfire
Bernat and Anne Riudavets moved to Napa County from San Francisco four years ago to build their dream home. They got married on the property, and although flames from the Hennessey Fire destroyed their beloved house Wednesday night, their wedding altar still stands on the property. The Hennessey Fire is a piece of the LNU Lightning Complex Fire, which has grown to more than 302,000 acres with just 15 percent containment,

5:30 p.m.
Residents wait to evacuate Walbridge Fire
LNU Lightning Complex Incident in the North Bay has burned at least 219,067 acres. As the Walbridge Fire, one of the many that make up this massive blaze, approaches the Russian River, many residents are choosing not to evacuate their homes. Once local tells ABC7 News there are still "hundreds" of people there. The fire is only 7% contained.

4 p.m.
Sonoma Co. officials provide wildfire update
The LNU Lightning Complex fires remain at 219,067 acres with 7 percent containment, officials confirmed during an afternoon press conference with Sonoma County and CAL FIRE officials. A fire official said there was not much fire growth overnight and into Friday. Officials also said there was increased fire behavior Friday in the Dry Creek Valley side of the fire, but there is less smoke in the air.

About 500 firefighters have been added to the crew fighting the Walbridge Fire. That fire remains around 3,000 acres, which is "good news," a fire official said Friday. At this point, the fire is heading toward the Russian River, but has not crossed the water yet. Officials say they are concerned over changing weather conditions and a possible change in winds.

In a tweet by Vacaville Police on Friday, it said it has lifted all evacuation orders for the city of Vacaville.

"We are happy to report ALL evacuation orders for the city of Vacaville now been lifted."

The agency said there are no active evacuation orders within the Vacaville city limits and all residents are clear to return to their homes.

7:30 p.m.
Man found dead during fire damage assessment in Solano County, sheriff's officials say
A man who lived on Pleasants Valley Road in Solano County has died, sheriff's officials said Thursday.
Solano County Sheriff's Office says they discovered the deceased man during a search assessing fire-damaged areas in the English Hills area near Pleasants Valley Road.
It is unclear at this time if his death was related to the wildfires.

8:30 a.m.
Felton, surrounding areas in Santa Cruz County told to evacuate
Felton must evacuate immediately due to the fast-moving CZU August Fire. Mandatory evacuations are in effect from Davenport south to the Santa Cruz city limits. Also throughout the northern part of the county including Boulder Creek, Bonny Doon and North Coast. Ben Lomond and Lompico must evacuate immediately.

5 a.m.
PG&E worker dies in Vacaville while assisting first responders
A Vacaville-based Pacific Gas and Electric troubleman died while assisting first responders as they dealt with the LNU Complex Fire, PG&E spokesperson James Guidi stated. No other details have been released out of respect for the troubleman's family, Guidi said. According to Cal Fire, as of Wednesday night, four civilian injuries due to the fire had been reported.