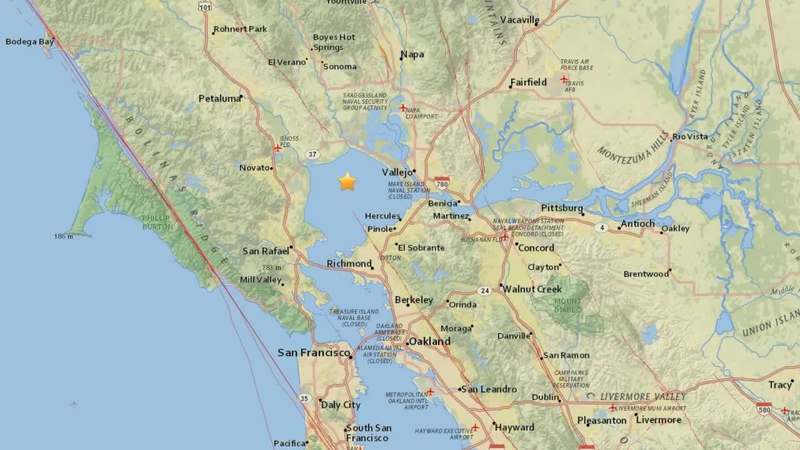 NOVATO, Calif. (KGO) -- Many Bay Area residents felt a big jolt this afternoon. The 3.6 magnitude earthquake was centered in the North Bay, the largest of small quakes the area has seen in twenty years.

VIDEO: What to pack in your earthquake emergency kit
EMBED More News Videos

North Bay residents weren't sure what was happening, but in Marin's unincorporated community of Black Point, just about everyone felt something.

"I actually thought I left my car in gear out in front because I had just gotten into the house. I sat down in front of my computer and boom, it was like, I went outside to see if my car had hit the house," said Michael Bransfield of Black Point.

The source of that boom came from 7.5 miles below San Pablo Bay. It's where the Hayward Fault and the Rodgers Creek Fault are believed to be connected.

"It's not the first time. This general area of the epicenter has been the location of numerous faults, earthquakes in the last twenty years. This just happens to be the largest of those," said David Schwartz, a geologist emeritus with the U.S. Geological Survey.

What's more, experts say there's a 33 percent chance there'll be a 6.7 magnitude quake along the Rodgers Creek Fault by 2043.

As for this latest temblor, no damage was reported but it did rattle plenty of nerves.

"I've only been in California since '94 so there have only been a few large enough for me to feel, but definitely kind of something that scares me," said Sarah Frazier of Black Point.