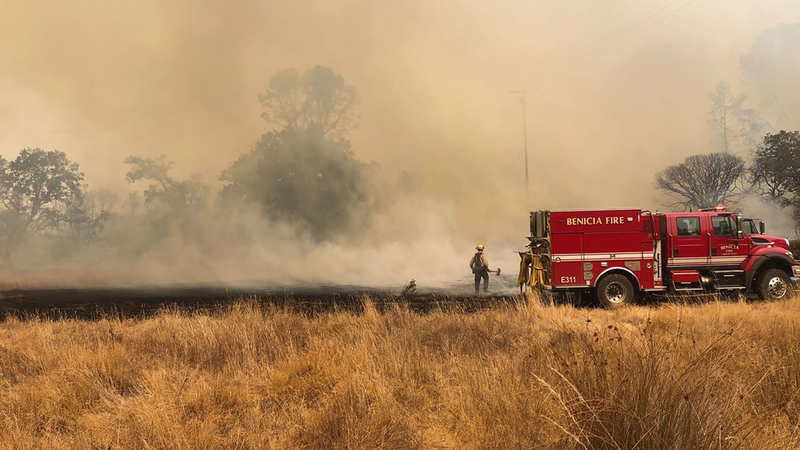 ANGWIN, Calif. (KGO) -- The Glass Fire is moving dangerously close to the northeastern edge of Angwin in Napa County.

ABC7 News crews went directly into the fire line along Freisen Drive, where flames are bordering the small town.

Firefighters told ABC7's Stephanie Sierra their teams are working on building a fire line from Freisen Drive to Spring Lake Drive to prevent the flames from moving further into Angwin.

"We will never give up," said one firefighter carrying an 140-pound hose up the hill to fight the flames.

These firefighters are a part of Strike Team 2398C in Sonoma County.

"We can never thank them enough," said Lisa Augustine Broman, who lives down the road.

We met Broman as she was checking on her parents' vineyard in Deer Park. "Oh my gosh... we're so appreciative... my parents' home is still standing," she said. "We are one of the fortunate ones."

"Did you ever lose hope?" Sierra asked.

Incoming winds are a major concern for firefighters battling the Glass Fire in Sonoma County.

For firefighters in Sonoma County, the waiting may be the hardest part. With every day of the Glass Fire, they see another card, but what will it be?

That question dominated the morning and early afternoon on Thursday 20,000 feet above the Sonoma Valley. Fire crews from across the state topped off their trucks with water and hosed down every possible hotspot while making plans and back-up contingencies.

"We spend a lot of time with alternate plans," said Battalion Chief JustIn Benguerel. "We can generally predict, but the way things are going, they can be challenging."

This, the lull before a potential firestorm driven by winds that did begin to arrive later, coming from the northeast.

As of now, winds have not materialized from at higher elevations of the #Glassfire. Likely later. Smoke laying low. So are firefighters along Adobe Canyon. They're spread out hoping for to avoid battling wildfire in such difficult terrain. https://t.co/Z7QfOhlMzb pic.twitter.com/na2FIrdckA

It's what this region doesn't need on yet another Red Flag Day following the Glass Fire's romp along Highway 12 on Sunday night. Fourteen thousand people remain evacuated.

Among them, Douglas Payne remembers a ridge behind his house. "The trees used to be 100 feet tall. The ball of fire was 500 feet tall. Astronomical."

"This is our 20-inch research grade telescope," said Chris Cable, the executive director.

Fire burned to the observatory fringes Sunday night. on Thursday, after finally acquiring permits from Cal Fire and the California State Parks, a team caravanned up the mountain, pulled the instrument from its mounts, and hauled it away for safe keeping. "I mean, it would be bad to lose. The equipment is worth more than the building."