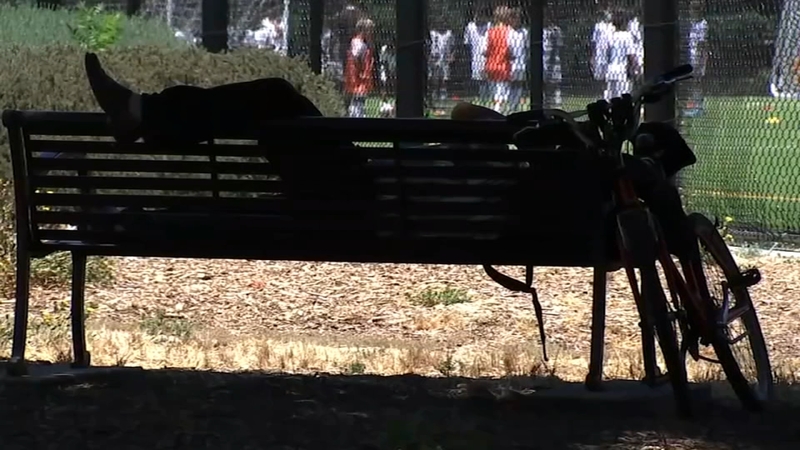 'I don't like it': Weekend heat wave hits Bay Area

According to ISO, the move is being made to "avoid a possible shortage of energy as extreme heat in California and a growing wildfire in Southern Oregon threatening transmission lines continue to strain the state's electric grid."

In San Jose, hiding from Friday's heat meant moving activities to the cooler evening. However, no nighttime relief is expected for the weekend's Bay Area heat wave.

Elijah Alvernaz and his father were enjoying the afternoon at Plaza de Cesar Chavez. It's an area where the City of San Jose was taking advantage of the shade.

The city only recently introduced Viva Parks. The events put people, food trucks, drinks and live music on the plaza every Thursday and Friday from 5 - 9 p.m.

Elsewhere, hot temperatures have called for the activation of three cooling centers across the city, Friday through Sunday. The move follows the National Weather Service's Heat Advisory, lasting just as long.

"We opened Cooling Centers last month, and during the activation, we saw about 60 people visit over the course of three days at our two cooling center sites," Daniel Lazo, Interim Public Information Manager, Parks, Recreation and Neighborhood Services explained. "So, people are still utilizing these centers, really as a place to cool down."

RELATED: VIDEO: What is a Flex Alert?

Friday's issued Flex Alert forced the Kulkarni family of San Jose outdoors- away from AC and use of any large appliances. Those are just a few ways ISO is encouraging voluntary conservation.

"We're just getting out of the house in the evening to cool off a little," Neil Kulkarni said about his family. "And give them some outside time."

Inside Icicles on Lincoln Avenue, ABC7 News found relief from the heat, hand-rolled. Each frozen treat came with the promise of cooler ice cream concoctions.

"When you have it in a regular cooler, the temperatures are low," employee Maile Miranda shared. "But because we're putting it directly on a metal slate that's around -25 degrees... it keeps it extra cold."

This weekend, California residents can take the extra step to cutback and conserve energy use.

In a statement to ABC7 News on Friday, Cal ISO said:

"The Bootleg Fire in southern Oregon has reduced import capability over the California-Oregon Intertie. Following the issue of its Warning, the ISO has been requesting additional energy from its neighbors, and may call upon dispatching emergency demand response programs from 6 p.m. to 8 p.m., which is the peak and net peak. That reduction in demand may be sufficient to avoid further emergency levels and avoid outages. The ISO's Flex Alert is in effect until 9 p.m. tonight. We encourage consumers to voluntarily reduce energy use to help us maintain a grid reliability."

ISO has extended the statewide Flex Alert for Saturday between 4 p.m. and 9 p.m.

For information on more ways to conserve, click here.