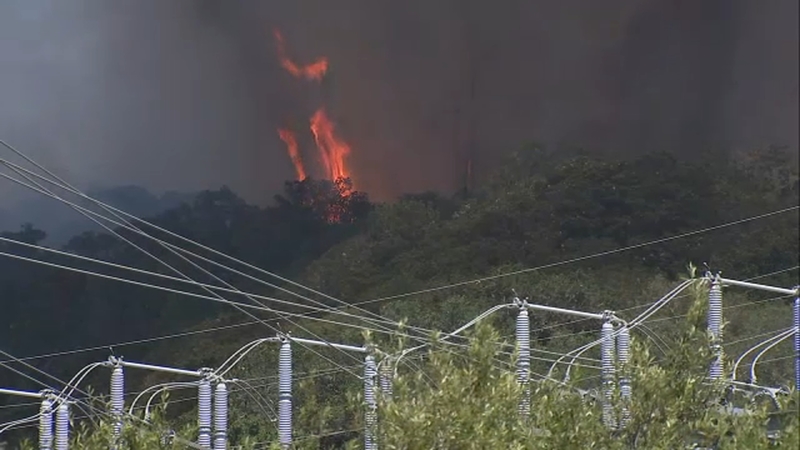 All evacuation orders have been downgraded to warnings on the six-alarm fire.

UPDATE: The #EdgewoodFire is now 80% contained. Here is the perimeter map. #CaWx pic.twitter.com/kwpn9vgC5T

Residents in the Woodside and Portola Valley areas should expect to smell smoke from the fire over the next 72-96 hours as crews continue to reach full containment, fire officials said.

During a briefing Tuesday, officials said the fire is burning in a north to northwesterly direction towards north Canada Road and crews are actively working to protect homes at risk of catching fire.

Officials say a firefighter was injured while battling the blaze and has been taken to the hospital. Their condition is unknown at this time.

6:30am UPDATE: The #EdgewoodFire is now 20% contained, and 20 acres. This is the current view of the fire from the end of Rocky Way in @sanmateoco. Thank you @calfireSCU & @calfireczu for sending Strike Teams. #MutualAid pic.twitter.com/Ga5u5lQ6g5

Multiple agencies are assisting in the fire response, which includes support from the air, the CAL FIRE spokesperson said.

CAL FIRE confirmed the blaze was extremely close to homes.

"We hit it really hard yesterday with aircraft. We have a good line around it. We scraped the ground so the fire cant cross," said CAL FIRE Battalion Chief Bob Simmons.

Kathy Hibbs and her family decided to evacuate after 2:30 p.m. She described seeing smoke and flames as they drove off.

"We heard one report because somebody was up in one of the copters. It was basically 200 feet from where the pavement is. Which is awfully close," said Hibbs.

The Edgewood Fire in San Mateo County has burned at least 20 acres and forced evacuations of several neighborhoods.

"We had a checklist that I was going through and we were just yelling at each other, like, what do we need to do, what am I supposed to do," said Leo Gray.

Down the block, Bruce Baker decided to stay back. He's lived in the neighborhood for 40 years and said this has been their closest call.

"I cant imagine people losing their homes. Up in Paradise, Chico and Santa Rosa. It hits home now more than ever," said Baker.

Bruce described hearing what sounded like an explosion around 2:20 p.m. and then they lost power.

As PG&E crews could be seen around the area.

Luz Pena: "Any idea of what may have caused this fire?"

CAL FIRE Battalion Chief Bob Simmons: "I have investigators out here right now. Working hard on determining the cause of the fire."

For many residents, Tuesday's fire was a close call that reminded them of the importance of always being prepared with an evacuation plan.

Firefighters initially responded to two fires shortly after 2:20 p.m. in the area of Edgewood Road and Crestview Drive and the California Highway Patrol reported that smoke was visible from Interstate Highway 280.

All evacuation orders have been downgraded to warnings. See the map below for the latest update:

Stanford University also reported impacts as a result of the fire, with a power outage affecting many parts of the campus due to a downed PG&E transmission line, school officials said on Twitter.

Smoke from the fire may be visible from campus but there is no threat to the campus as of late Tuesday afternoon, Stanford officials said.

According to PG&E's website, thousands of customers are without power throughout parts of San Mateo County including areas in the evacuation zone.

San Mateo County Parks tweeted that Edgewood Park is closed due to the fire burning in a portion of the park.

Park Closure: Edgewood County Park and Natural Preserve closed due to a wildfire in one portion of the park. Stay out of area to allow emergency crews access @CALFIRECZU @SMCSheriff pic.twitter.com/UKHjAZkr3x

Video and images sent to ABC7 from viewers, showed smoke rising from the hillside where the fire started which could be seen from as far away as Alameda.

Thankfully, CAL FIRE says no structures have been damaged or lost in this fire.

The cause of the fire is unknown at this time.