The family considered leaving their village, but the father is an officer in the army fighting the Russians.
KGO
By Dan Noyes 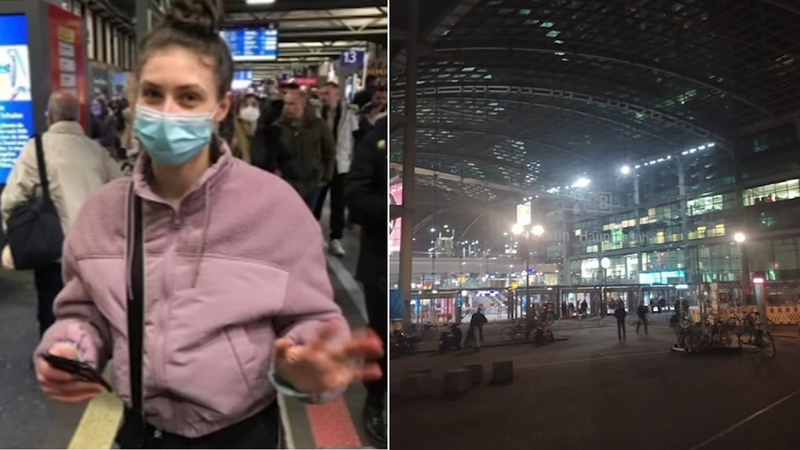 SAN FRANCISCO (KGO) -- We're getting a firsthand account from a teenager who fled the war in Ukraine this week; it was a perilous journey. Her parents decided to send her to safety out of the country, but needed the help of her godmother in Southern California.

This story also gives a glimpse into an even darker side of the war in Ukraine that hasn't been discussed much -- predators who target young women and children, now on their own, as they flee for safety.

When Russian missiles hit the city of Zhytomyr, the Rybchynska family had to take quick action. Their 19-year-old daughter attended college there; they brought her home to their village 45 miles away. Anya told me she could hear Russian jets flying to their targets.

Anna Rybchynska told the I-Team's Dan Noyes, "We were under pressure because we hear the sounds, the bombs, also there, the missiles were flying around the house."

Her mother worried about Russian ground troops arriving; news of their atrocities is spreading, including the rape and murder of Ukrainian women and girls.

Ukrainian woman and new mother Olga Korol, is stuck in Germany over issues with her infant's travel documents. They're trying to fly to SFO.

Lyudmila Rybchynska told us, "At first, Russian soldier only attacked, only bombed. But now they are, as, they look like a beast, look like the beast."

The family considered leaving their village, but the father is an officer in the army fighting the Russians. The mother insists on staying to support him and to care for her parents because "they are older and they need my helping."

So, Lyudmila needed help getting her daughter out of the country. She reached out to a close friend from college - Anya's godmother, now a critical care nurse at Cedars-Sinai in Los Angeles.

Olena Svetlov: "She said that if I'm going to die, if our kin will die out, then at least Anya will be safe."
Dan Noyes: "That's pretty heavy, huh?"
Olena Svetlov: "Yeah. It was really -- touched us, some on a very, very human level, like deep, deep, deep inside."

Olena had just made connections at this rally at the Ukrainian Cultural Center in Los Angeles. Meka Voge and her husband found a family in Germany that would take Anya in.

The three-day journey began in a van; the family had to use all their savings for a ride to the border with Poland. Almost there, the driver asked Anya for even more money to take a different route and avoid the checkpoint lines. She told us, "It's dangerous for me as a girl to leave Ukraine alone. It was really dangerous."

Anya said it was chaos in Poland; she couldn't find a place to sleep, and she had several encounters with people she believes were human traffickers.

"And there are lots of volunteers, like 'volunteers' who ask you to join them. They just want you to get to the place where you will work on some people in a sexual way."

Then, Meka arranged a hotel for Anya and a train to Stuttgart, Germany. Olena watched on Facetime as Anya finally arrived.

A shelter in Poland is rescuing injured animals from war-torn Ukraine like Moon, a German shepherd who was found severely dehydrated.

"I have this picture where she's like waving," said Olena. "After three days after all of that she wants through. And I'm pretty sure from 19, she's probably grown up to 25 in just three days, you know?"

In her first week in Germany, Anya has already found work with a nonprofit helping the people of Ukraine, saying, "That's my country. That's my motherland. There are my people, important people in my life, who I want to protect."

Anya wants to return to Ukraine as soon as it is safe. Her mother is so thankful. She ended our interview with a message to all those who helped, and to you.

Lyudmila Rybchynska told us, "I wish you a blue sky, a blue peaceful sky under your head and happiness, healthy, and your wishes come true."

So many people help in a very direct way. If you want to help, here are verified links to charities that are doing great work in Ukraine.