Butts said the injured fan was involved in a brief pushing match with another person, who was possibly wearing a Rams jersey.
KGO
By Amanda del Castillo and Cornell W. Barnard 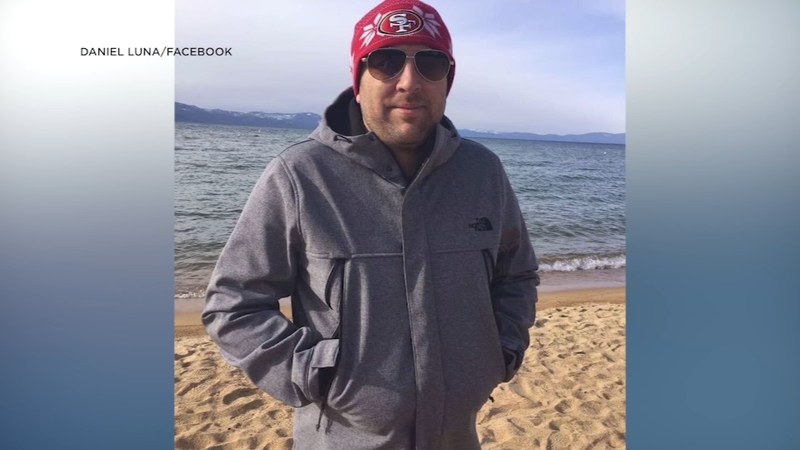 Mayor describes how 49ers fan in coma was injured at SoFi

OAKLAND, Calif. (KGO) -- We're learning more about an Oakland restaurant owner and 49ers fan, who is now fighting for his life following a brutal assault outside SoFI stadium during last Sunday's NFC Championship game between the San Francisco 49ers and Los Angeles Rams.

Thursday night, Inglewood Mayor James Butts announced police have video from the parking lot at SoFi Stadium that identifies a suspect in the attack, but the video is not being released at the time.

The mayor says the suspect appears to be wearing a Rams jersey, and the video shows him in a physical fight with Luna, who was hit and fell to the ground.

The Mayor of Inglewood says police obtained video from the SoFi Stadium parking lot that shows the moments Oakland resident and 49ers fan Daniel Luna was knocked to the ground.

"Mr. Luna pushes someone from behind. That person, when Mr. Luna turns away, pushes him, takes another step towards him and punches him- looks like in the mouth area," Butts described. "Mr. Luna falls back on his head."

"We have to remember, sports teams, stadium operators have a duty to safeguard their visitors, i.e. the fans," attorney David Lira told ABC7 News.

Lira was the lead trial counsel on behalf of Bryan Stow vs the Los Angeles Dodgers.

Stow, a Bay Area resident and San Francisco Giants fan, ended up in a coma following a brutal beating by Dodgers fans in LA, back in 2011.

"The situation in Dodger Stadium, it is in nowhere comparable to this," Butts said.

Bryan Stow, the San Francisco Giants fan who was brutally beaten at Dodger Stadium five years ago, made a rare and inspiring appearance Thursday at Hillsdale High School in San Mateo.

Butts explained Luna was standing with a group of 15 or 16 people who he believes were 49ers fans, when the situation turned physical.

He went as far as calling it, "A small altercation that went very bad."

Although it's unclear what the men were fighting about, attorney Lira said officials need to be constantly reviewing security plans and making changes, depending on the crowd coming to the stadium.

"This was a NFC Championship game between two rivals. No different than the Dodgers and Giants rivalry," Lira added. "So it wasn't a surprise, unfortunately."

He said only time will uncover whether plans specific to the NFC Championship game were fully executed.

SoFi Stadium said it is working with police as part of the investigation.

"You're not going to stop every altercation, argument that occurs between fans. It's just not going to happen," Mayor Butts told reporters.

Lira shared, "While you can't prevent every instance of assault or violence in any arena, I will be interested to see if there are gaps in their security plan. Could this have been prevented?"

Friends of Daniel Luna are shocked and outraged that he may have been targeted just for being a 49ers fan.

"It's heartbreaking what happened to Daniel, for the community and his friends," said Alex Bell owner of Snow White Coffee.

An Oakland man is now in a medically induced coma after police say he was assaulted outside of SoFi Stadium Sunday during the NFC Championship game.

"It's devastating to think he was going to watch a football game and to have this happen," said Bell.

Luna remains in a coma after suffering severe injuries from last Sunday's assault.

Police say Luna was wearing a 49ers jersey when he was found in the parking lot, though it's unclear if he was targeted for being a Niners fan.

Thirteen-year-old Yasmine Romero is traumatized by the violence that left her father bloodied and bruised after the Rams playoff game.

"Daniel is a great guy, I've known him 30 years. I don't know what he could've done to deserve a beating, I don't know what kind of people could do it, maybe they're not people. I just wish police find them and they will pay for what they did," said friend and fellow business owner Anatoly Kisilyov.

"He would never start a fight or instigate this kind of thing," said Moreira.

Police have no suspect descriptions.

Luna's family declined interview requests, but shared a statement with ABC7 News:
"We appreciate all of the prayers and support from the community, God bless everyone and keep Daniel in your continued prayers. Our family requests privacy at this time."

In another statement, The 49ers organization said:
"What happened to Daniel Luna is reprehensible and we strongly condemn all violence. We know local authorities are conducting a full investigation and we're here to support them however we can. Our thoughts and prayers go to Mr. Luna, his family, friends and the medical team providing him care."

Police say they're working with SoFi Stadium security and reviewing surveillance footage in the area.

Friends say Luna is a survivor. His restaurant has weathered the pandemic, they hope he can survive this act of violence.

"I'm sorry and I condemn this act of cowardice, I'm sure he's going to be fine," Moreira added.