KGO
By Stephanie Sierra
SAN MATEO COUNTY, Calif. (KGO) -- In the midst of the coronavirus pandemic, a local elected official is stirring up some unwanted attention in San Mateo County and there's no plans it will stop.

It all revolves around the San Mateo County Harbor District, a publicly-elected commission responsible for operating two popular marinas along the Peninsula coastline.

For decades, the district and governing commission has been criticized for lacking everything from professional decorum to fiscal oversight.

"This is dysfunctional," said Commissioner Sabrina Brennan yelling at her colleagues in the meeting. "Are you telling me he didn't send the photos?"

Allegations of poor governance have been a reoccurring problem.

In 2016, the San Mateo County Board of Supervisors issued recommendations for the district to improve morale, and reputation, among other things.

It starts after Commissioner Brennan references accusations she made about her colleague Commissioner Tom Mattusch. In 2017, Brennan filed a sexual harassment claim against Mattusch alleging he sent her pornographic photos. An investigation done by an outside attorney concluded that Mattusch, before being elected, emailed over 40 people explicit photos, including Brennan. But, Mattusch denies the harassment allegations and the attorney concluded they were unfounded.

"I want to call to order a question," said Commissioner Virginia Chang Kiraly trying to speak during the meeting. "Quit lying, Sabrina."

"Are you suggesting he did not send pornographic images?" Brennan said.

The yelling continued as several board commissioners spoke over each other.

This meeting highlights what's been criticized by the Civil Grand Jury as a 50 year history of problems surrounding the district - including running multi-million dollar deficits and allegedly wasting taxpayer money.

"I hold all of us here at the county accountable to some degree," said Assemblyman Kevin Mullin, (D) - District 22. "It's a real embarrassment for San Mateo County... especially in these times of crisis, we need these boards to be working in a constructive and civil manner."

A 2014 Civil Grand Jury report titled: "What Is The Price Of Dysfunction?" accused the commission of being in 'disarray' and recommended the San Mateo County Board of Supervisors take action to address it.

San Mateo County Supervisor Don Horsley recommended the district be given 18 months to demonstrate a commitment to good governance and improvement.

"They did make progress," Horsley said, adding the district appeared to be improving morale.

"Do you think that last meeting was improvement?" ABC7's Stephanie Sierra asked.

"The last meeting was the worst I've ever seen... the people's business can't get done," said Horsley. "It's the most disgraceful performance I've ever seen on part of an elected official."

"Why did it take five years for this to be addressed?" Sierra asked.

"That's a good point...maybe in some ways we were a little negligent," he said. "But, enough is enough, for me I've seen enough, this needs to be dealt with now."

ABC7 requested an interview with the current commission board president, Nancy Reyering. But, she refused to speak on the phone or on camera but did provide the following statement:

"The majority of the board has to work very hard to accomplish the pressing business objectives of the District. At a basic level we are going to ensure the meetings conform to the proper parliamentary procedure as outlined in our policies."
-Nancy Reyering, Harbor District Board President 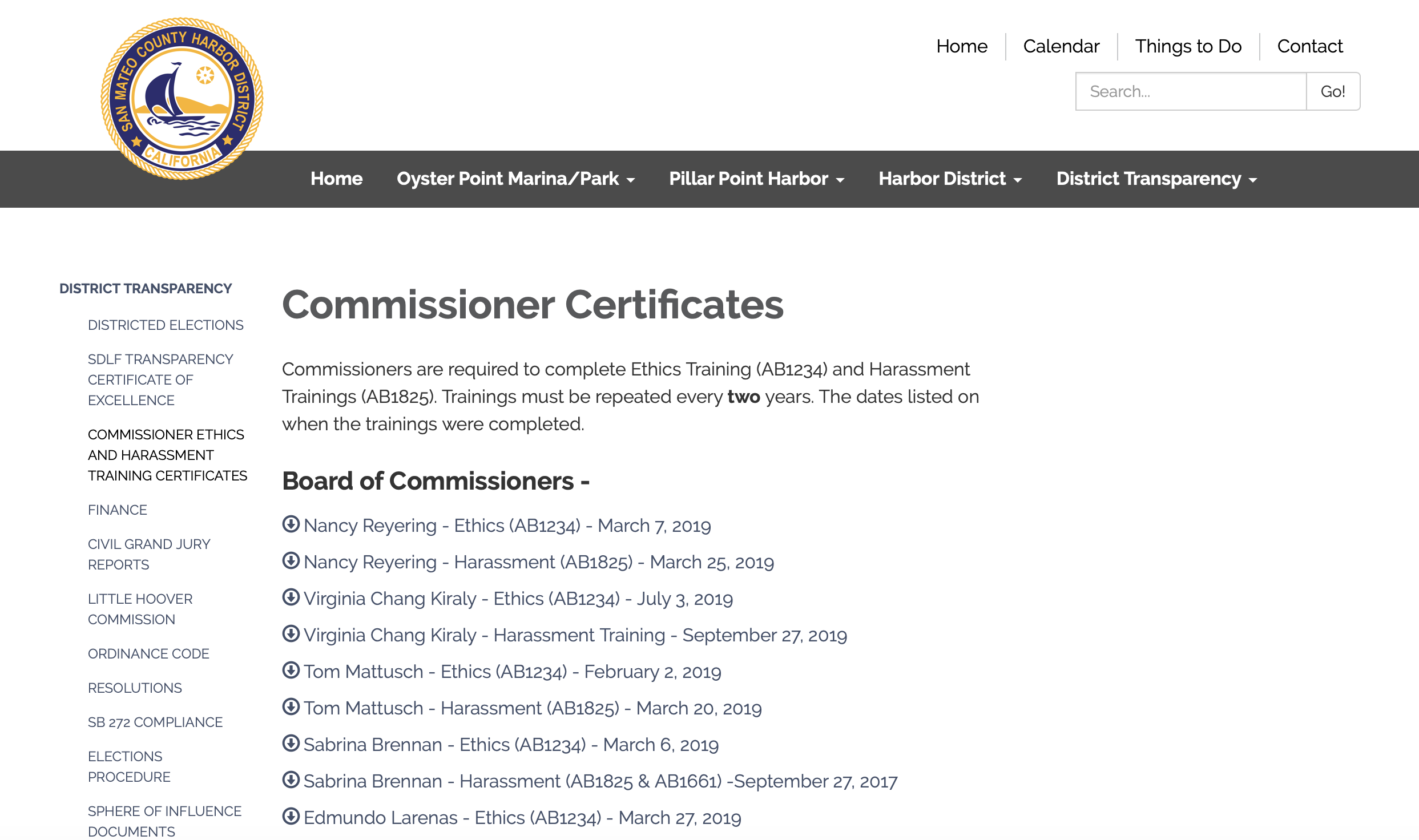 ABC7 reached out to Commissioner Brennan who refused an on-camera interview, but did tell us she's disappointed the San Mateo County Board of Supervisors didn't take action after learning of the alleged harassment.

"I will continue bringing up my harassment at these meetings," she said. "I won't be silenced."

Brennan provided the following statement on her behalf:

ABC7 reached out to Tom Mattusch for further comment, but have yet to hear back.

If you have a question or comment about the coronavirus pandemic, submit yours via the form below or here.Get the latest news, information and videos about the novel coronavirus pandemic hereRELATED STORIES & VIDEOS:
Report a correction or typo
Related topics:
politicscoronavirus californiacoronaviruslawsuitlegalpornographysan mateo county
Copyright © 2021 KGO-TV. All Rights Reserved.
CORONAVIRUS CALIFORNIA