Employees at a beloved camp in the Santa Cruz Mountains, serving those with developmental disabilities, told ABC7 News the site had been destroyed by fire.

Camp Krem is located on Brook Lane in Boulder Creek.

Across the 97-acre site, usual summers at the non-profit are known to offer children and adults with developmental disabilities, a sense of adventure.

However, as fires continue to torch the region, it's unclear what's left of the campground.

Unable to return to the site and assess the damage, Krem explained there's some fortune in that COVID-19 had already canceled the overnight summer session.

"It was tragic for us to have to cancel summer camp in the first place," she said. "But now that we know what's happened with the fire, it's actually quite fortunate that we were evacuating just a couple of people and not 185 people."

She explained that during a typical summer, Camp Krem would welcome about 100 campers and dozens of staff members on-site.


Video shared with ABC7 News showed destruction in Boulder Creek, last Thursday. The video was captured less than a mile from Camp Krem.

The footage showed homes that were actively burning, and torched cars.

Krem explained two people were living at the campground, and about a handful of others were showing up for work, daily.

Camp Administrative Director Layla Sharief was one staff member who reported to the site for work.

Recalling the day of evacuations, she said, "We had to make a choice. Like, what can we get out? And we all just kind of loaded up what we could, and got out."

She continued, "Unfortunately, from what we've heard, it's all gone except our brand new solar panels. Which pretty much are not going to be worth anything at this point."

"Over the past couple of years, we've really been trying to mitigate our fire risk," Sharief shared. "We received a grant last year and then also again this year to move back our defensible space. So, we've done that. We took down some trees- which kind of feels rough when you're in the mountains, to take down trees- but it was the best option for us. And clearing shrubbery, and just pushing our defensible space back."

"Defensible space, for us, was big," Krem added. "We kept expanding it, but evidently with a fire that big, that was not enough."

There is a new focus for firefighters on the Walbridge Fire - protecting a historic grove of California Redwoods in the North Bay.

At a Tuesday evening press conference, Deputy Chief Jonathan Cox with Cal Fire was asked when people might be able to return to their homes.

"We want to get people back in as quickly as possible," Deputy Chief Cox said. "The team has focused- we've dedicated an entire team for a 24-hour day operation to work on repopulation and 're-enterization' and all the plans that are necessary."

He continued, "With that, we're not going to sacrifice potentially putting people in harm's way."

"We're going to have to figure out a way to get ourselves built as quickly as possible, so that they can all start coming back again," Sharief told ABC7 News. "And having that safety and that second family, and having that all over again."

A community of people who have relied on Camp Krem for decades.

You can assist Camp Krem in their efforts to rebuild by clicking here for donations. 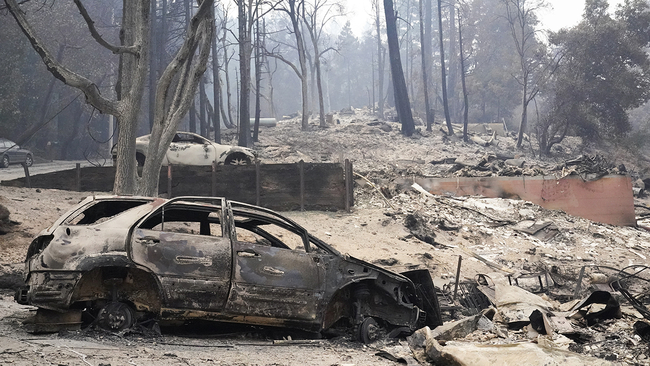