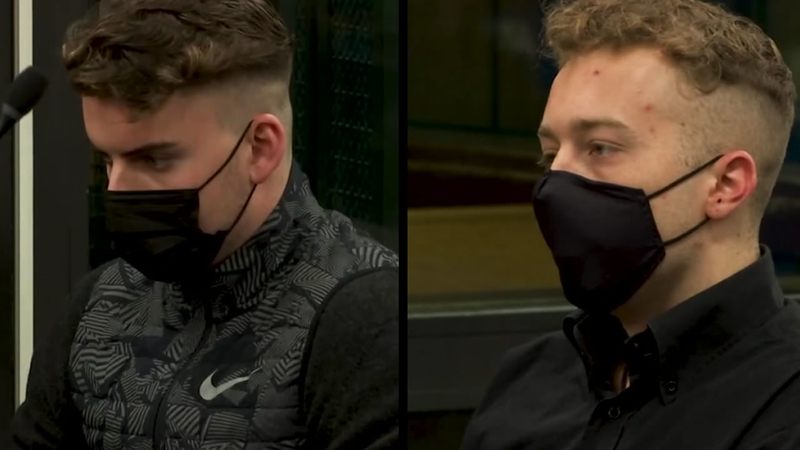 ROME (KGO) -- A San Francisco mother is in Rome, praying that her son's life sentence for killing an Italian police officer will be overturned. The appeal hearings began Thursday and the process is expected to take several weeks.

I-Team reporter Dan Noyes has been covering the case from the start, and he's back with the latest.

The two young men attended Tam High in Mill Valley and are now appealing their life sentences. One stabbed the officer -- he says in self-defense -- and the other struggled with a second officer that early morning in July 2019.

That first defendant who struggled with an officer and ran away is Gabriel Natale-Hjorth of Marin County, now 21 years old.

On Thursday, the prosecutor asked the court to reduce his life sentence to 24 years, but confirmed he's pursuing a life sentence for 22-year-old Finnegan Elder of San Francisco, who stabbed the second officer to death in July 2019. His mother, Leah, is in Rome for the appeal.

"My son is painfully aware that the actions that he had that night caused the death of a man, and he suffers from tremendous guilt," said Leah Elder. "He is also painfully aware of the injustice that his version of the events were never listened to or believed."

Finn Elder said from the start that he didn't know Carabinieri Vice Brigadier Mario Cerciello Rega was a police officer. He wore street clothes, did not have a badge, handcuffs or a service weapon. Elder said he thought Cerciello Rega and his partner were mob thugs coming for them after a drug deal went bad.

"I think that Finnegan has a very good self-defense argument," said Elder family attorney Craig Peters. "I think in the U.S., this would be a really good case, I think you could get a defense verdict on this."

Peters is on Elder's defense team that filed a 45-page appeal brief, listing example after example of the judges in the first trial favoring the prosecution, even steering witnesses while they were testifying.

He told ABC7 from Rome Thursday that the Italian appeals court is different than the American - the panel of two professional judges and six lay jurors are considering all the evidence a second time and will make their own decision.

"It's like in tennis, it's like a second set, OK? So imagine a tennis match. It's not that the first one is more important because it's a trial," said Mattei.

Based on what happened on that street corner after 3 a.m, Mattei expects the young men to return to the states soon, either acquitted or allowed to serve reduced sentences in an American prison.

"The facts are so confused and the conditions of the whole arrest was so messed up that to think that the boy of 19, you know, decides to kill a cop with a knife, to me, is a far call," Mattei said.

Also Thursday, shocking texts have surfaced in the Italian media, during the trial of another Carabinieri who blindfolded Natale-Hjorth during his interrogation. Shortly after the arrests, Cerciello Rega's colleagues suggested beating or killing the Americans; one text even says, "You have to melt them in acid."

"It really shines a light on the venomous environment that my son and the other boy were in, in those first hours," said Leah Elder.

The judges have locked down the courtroom because of COVID. No reporters or cameras allowed inside. Leah Elder was at first admitted, then asked to wait outside while the hearing continued.