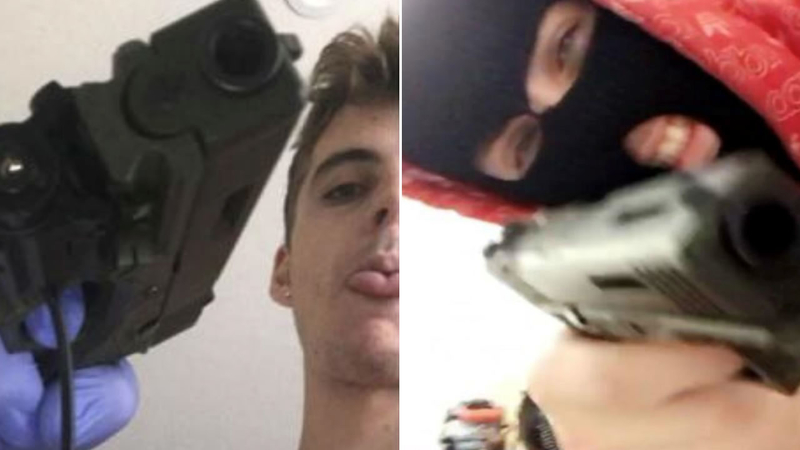 SAN FRANCISCO (KGO) -- Disturbing images have emerged of 18-year-old Gabriel Natale, graduate of Mill Valley's Tam High School, who is now being held in a Rome prison in connection with the death of 35-year-old Italian police officer Mario Cerciello Rega.

Italy's Adnkronos Press Agency has given the I-Team permission to republish the images that, it reports, came from Natale's cellphone after an analysis by Italy's "carabiniere" or police investigators.

One photograph shows Natale indoors, tongue out, holding a handgun with a blue glove. Another shows someone wearing a hood and a similar glove, holding what appears to be the same weapon outdoors.

Adnkronos also reports that the carabinieri found a large quantity of photos with drugs and cash on Natale's cellphone: marijuana in jars, plants, tablets with descriptions, cocaine in pieces or crack.

The press agency quotes the investigative report as finding, "He exhibits the possession of large sums of money which, correlated to some messages extrapolated from the WhatsApp application present in the mobile phone of the suspect, could still derive from the proceeds of the sale of narcotics."

Adnkronos also reports that Natale's palm and fingerprints were found on a hotel room ceiling panel, where investigators recovered the knife used to kill Cerciello Rega.

Natale's friend, 19-year-old Finn Elder of San Francisco, has admitted to stabbing Officer Rega but claims it was self-defense and that he didn't know Rega was a police officer.

Through his attorneys, Natale has said he didn't know Elder had a knife or that it was used in the altercation with police until after the two young men's arrest.

The news agency writes that carabinieri investigators analyzed cellphones for both Natale and Finn and concluded, "The profile of two young people emerges who prove to be bold and prone to recklessness."

The I-Team is reaching out for comment to family members and attorneys for both young men, and will update this report if they respond.

The leak from Italian investigators comes before Monday's hearing in which Gabriel Natale and his attorneys will ask a judge to release him from custody into home confinement, while the case progresses. Natale's grandfather has a seaside villa about an hour's drive from the prison in central Rome.