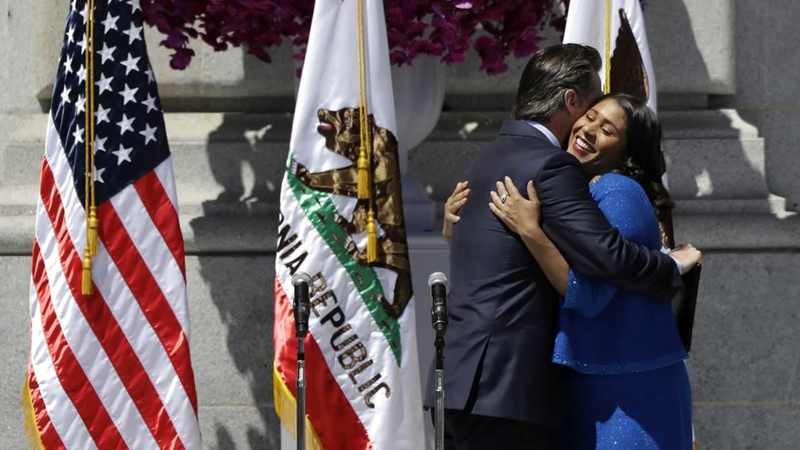 SAN FRANCISCO (KGO) -- History was made as London Breed was sworn in as the first African-American female mayor of San Francisco, the 45th person to take that oath.

Mayors from other U.S. cities as far away as New Orleans and Columbia, South Carolina were at the inauguration.

The Reverend Amos Brown called it "a moment of great substance."

It was San Francisco Mayor number 42, Gavin Newsom, who swore in the 45th mayor of the city, London Breed.

Newsom who once led this city, said homelessness must be the first thing on Breed's agenda.

"Street issues are out of control, they are, and I am now a cranky old guy saying what happened to my city every time I come to the city to shop with my kids. I'm like wow," expressed Newsom.


Newsom, who himself found the problem of homelessness especially challenging, had this advice for the new mayor. "You gotta be tough, you have to be compassionate. No city does more but you have to demand more, it's a two-way conversation."

On the issue of immigration, Breed took a stab at President Trump's old policy of separating kids from their parents. "We don't put children in cages, we put them in the classroom," she said.

That message of helping the most needed San Franciscans resonated with the crowd.

"I am confident behind her that we are going to protect our immigrant children, that we're going to fight for jobs, for mental health for all the people on the streets. There is so much hope today," said San Francisco resident Tracy Brown-Gallardo.

"She brings hope, she brings know-how, she brings competence," said Carol Tatum, a long-time resident who came to the inauguration.

During her campaign, Breed spoke of keeping people in San Francisco from being displaced. "People don't want to come and work here. People can't afford to live here, that's why you can't get good teachers, you can't live here with $70,000 a year," said San Francisco resident Gail Toliver.

The 43-year-old Breed, who grew up in a housing project a few blocks from City Hall, knows her message of hope fits the times. "I stand at this podium today because a community believed in me," she said.

"On this day, we are committed to rolling up our sleeves and working together," Breed said in her inaugural speech.

Rev. Amos Brown on the inauguration of @LondonBreed: “This is a moment of great substance.” pic.twitter.com/ybGx22cOtE

For background on the San Francisco mayor's election, visit this page.