"I just think it's important we show up no matter where we are in the world."
KGO
By Tara Campbell 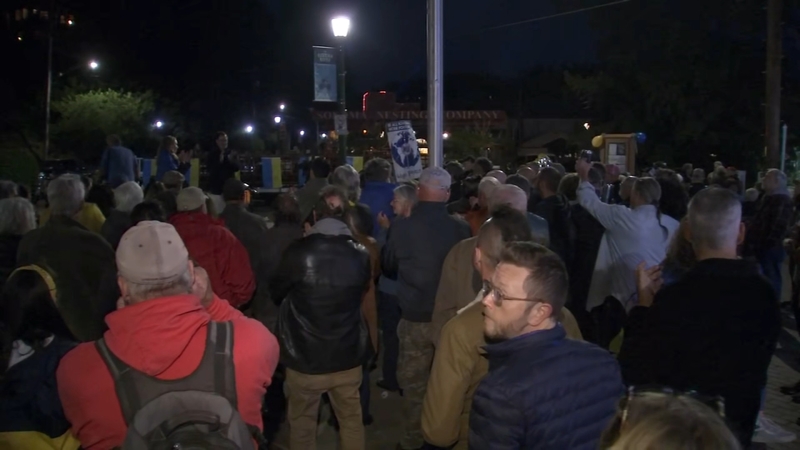 "I just think it's important we show up no matter where we are in the world," said Diego Castaneda, one of dozens rallying for Ukraine in Guerneville.

Dozens of people in Guerneville showed their support for Ukraine with a rally on Friday as the war with Russia intensifies.

"It's extremely distressing and you know I feel like I wish I could do more," said his wife, Rachel Lewin. Castaneda adding, "I think we're showing other folks around the world that even smaller towns care about this."

Outrage over the war in Ukraine continues to grow in the Bay Area where people rallied and fundraised for humanitarian relief.

When Mary Caponio heard about the rally she decided to spread the word by printing flyers. "I put them up and I called my friends, so we can at least participate," said Caponio.

A Ukrainian mother and daughter living in Jenner said the support goes a long as they fear for their family in Ukraine.

"No mother should have to go through what she's going through right now," said the daughter, who has two sisters who just fled Ukraine."I'm hoping the war is going to be over and Ukraine is going to win and they can go home and pick up where they left off and rebuild if they have to."

Supporters hoping the people of Ukraine somehow feel their support.

"Hopefully these images make it to Ukraine and hopefully they know we're feeling what they're feeling and that we really support them, said Lewin.

Hundreds of people gathered in San Francisco Thursday in support of Ukraine amid attacks from Russia.

"At least people in Ukraine can see we're out here supporting them physically," said Cesar Perez, who attended the rally with his young family.

After seeing the footage all week, it's just horrendous the children and women be harmed the young men going out and fighting it was just too much to watch on TV."