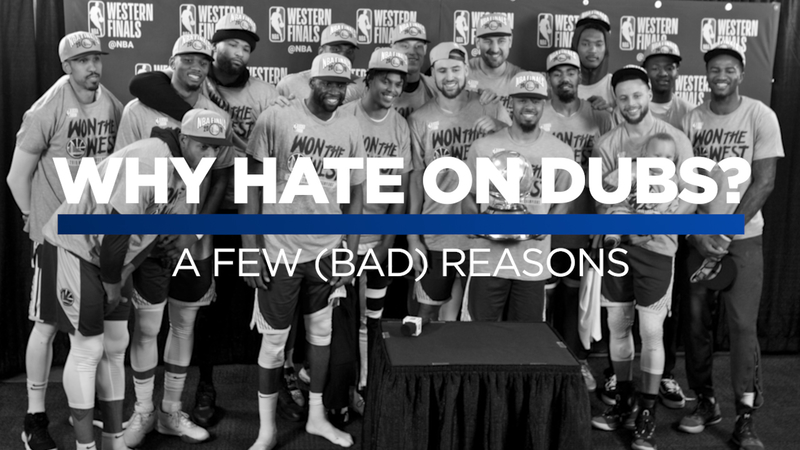 Why people hate the Warriors

OAKLAND, Calif. (KGO) -- This might shock Golden State Warriors fans, but most of the rest of the country loves to hate on the Dubs. For every Bay Area fan that cheers them on, there are 10 more non-Dubs fans jeering, cursing and rooting against the blue and gold as they shoot for their third straight NBA Title.

If you're wondering what opposing fans could possibly hold against the Warriors, we've combed the internet to compile the top 10 things that people love to hate about the Dubs:
1.) Because they 'ruined the game' of basketball

It's safe to say that there's never been a better 3-point shooting team in the history of the NBA. The Warriors are a once in a lifetime group in that respect. But their success has made other NBA teams change the way they play.

Teams are now shooting way more 3-pointers than in years past (without the Dubs success). Even youth basketball players, who are growing up idolizing Stephen Curry, are trying to emulate #30's half-court moonshots rather than learn the more traditional cornerstones of playing the game (to the frustration of many youth coaches).

2.) Because Stephen Curry dominates (on and off the court)

His story is straight from a Hollywood script. The baby-faced and undersized guard from the tiny college rises to the highest pinnacle of the NBA breaking records and winning titles and MVP awards. On top of all that, he's also WINNING at life. He's squeaky clean and wholesome, married to a beautiful and successful wife and has a beautiful family and they all love each other. When you're the golden boy of the league, haters are gonna hate.

The Dubs weren't always a destination for the top players in the league. But after their first title, talented veterans wanted a chance to chase a championship. It started with David West, who used to be the face of the Indiana Pacers... then came Kevin Durant... and this year, DeMarcus Cousins.

But what haters conveniently ignore, is that this is not a new phenomenon. Look at every team LeBron James has been on. There's always been veterans trying to get in on a title. And don't forget when Karl Malone and Gary Payton joined the Los Angeles Lakers team of Kobe and Shaq. But people still want to hate the Dubs for this.

4.) Because Dubs fans are loud and proud

Oracle has long been known as one of the loudest arenas in the NBA. And that's all because of the fans. Hardcore fans that stuck through the real rough years are LOUDLY and PROUDLY reveling in this amazing time of success, but haters don't appreciate this.
And haters also don't love how the Dubs have recruited more and more fans from all over the country as they've become more successful (haters call these "bandwagon fans," but fans are fans, right?). But this happens with every dominate team. So again, haters gonna hate.

5.) Because they are from California

Newsflash! The rest of the country doesn't love California.

They might be jealous of the great weather, beaches, Silicon Valley and Hollywood or that our teams are really good at sports. In the NBA, it goes back to the Lakers with Magic Johnson and then with Shaq and Kobe. Teams from California have regularly been the dominant "villains" of the NBA. And then along came the Warriors.

6.) Because Draymond... is Draymond

He's loud, passionate, and tough on and off the court. Everything that makes Dubs fans LOVE him makes the rest of the country HATE him. Haters particularly got on him for his "rough" play in the 2016 playoffs when he unintentionally/intentionally (depending on who you ask) kicked a couple players in their private parts.

Haters labeled Draymond as a "dirty" player after this, but fans know that this is just Draymond's style. He's physical and fiery and he's always been this way. When he was at Michigan State he was the emotional leader of team that regularly went deep into the NCAA tournament.

7.) Because they keep getting "lucky" in the playoffs

Haters often point to this, saying that the Dubs' success is built on the misfortune of their opponents. In 2015 NBA Finals, the Warriors beat the Cavaliers, who were without star guard Kyrie Irving. In the 2017 West Finals, the Dubs rallied from down 23 points to win Game 1 and the series after Spurs star Kawhi Leonard hurt his ankle. In the 2018 West Finals, the Dubs rallied to beat the Rockets after guard Chris Paul went out with a hamstring injury.

The haters also love to point out that when the Cavaliers were healthy in 2016, they beat the Warriors.

But injuries are just a part of the game. You can call it "lucky" but you could also make the argument that the Dubs have been better at staying healthy. Over the last five years, the Warriors' core players have played 99 playoff games. That's a full EXTRA season and they've stayed relatively healthy the whole time

8.) Because Curry chews on his mouthpiece

Haters REALLY hate this. They think it makes him look smug and arrogant. They call it gross, among other things (check out Twitter... or rather, don't.)

But the real reason people hate it is because the mouth guard is kind of like Curry's secret weapon. One fan studied Curry's shooting with and without the guard in his mouth and found he actually shoots BETTER when he's chewing on it. And Curry agreed, telling ABC's Jimmy Kimmel, "It kind of calms me down, gets me in my rhythm."

9.) Because the Curry Family is so famous

Like Stephen is the Golden Boy of the NBA, the Curry Family has become the First Family of the NBA. They play golf and have dinner with the Obama's, Ayesha Curry is the figurehead of growing multi-million dollar culinary empire and their daughters have been the viral stars of the NBA Finals press conferences.

But can you blame them for enjoying the success?

You know you've reached another level of success when people start hating you. The "evil empire" of the New York Yankees got there, the New England Patriots and Tom Brady got there, and now the Warriors are there.

Dubs fans surely are hoping the rest of the country keeps hating them for years to come.